When I first graduated, most of my friends still lived in the Rochester area. Now that it’s been a few years, my friends have scattered themselves all over the country. A few of my sorority sisters, including my best friend Ariel, are currently living in Boston. I love the city of Boston and I hadn’t seen Ariel in nearly two years, so I was really excited when Jackie, Ariel, and I started planning this trip in December!

Ariel and I five years ago.

Fajitas and ‘Ritas! Fajitas and ‘Ritas is a Tex-Mex restaurant in Boston that specializes in fajitas and margaritas. Ariel, Jackie, and I met my friend Sam there and had a very filling lunch that started in typical us-fashion by spilling half a pitcher of margarita all over our table. Next time I go to Boston, I’m definitely parking my butt there for a few hours. 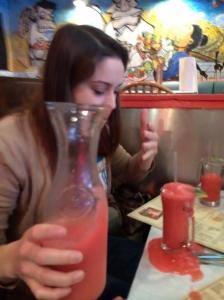 This is why we can’t have nice things.

Going Out I don’t really go out much in Reading. I like staying home and hanging out with my best friend aka my free-loader roommate aka my dog. Ariel and Jackie are on the same page as me, but we planned one staying in night and one going out night. We had so much fun on our going out night AND Ariel had an Uber coupon so we basically got home for free. I really liked the place we went (I unfortunately cannot remember the name), mostly because I was with my friends, it wasn’t too crowded, and they were playing good music. 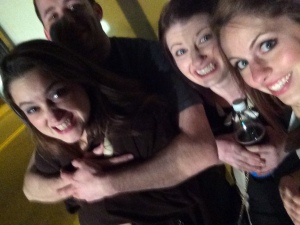 Freezing our butts off at the bus stop!

Sunday Brunch On Sunday morning, we found ourselves sitting in the living room debating between going to a diner or driving a little further to this farm with a restaurant on it. We chose the farm-restaurant. The restaurant itself was tiny and there was a long wait, but it was SO worth it! I was going to get my usual (eggs benedict) but then saw that they had lobster eggs benedict. When in Boston! 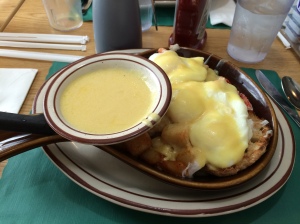 Reunited and it feels so gooood. Just being in the same place at the same time was enough for me! I’ve noticed that whenever I’m on adventures with my sorority sisters, we manage to turn wherever we’re staying into a mini-version of our sorority house. Ariel’s apartment was no different. With our arrival, there was suddenly an abundance of monogrammed shirts, purple everything, Disney princess cups, Ben and Jerry’s ice cream, and clothes everywhere. Some of my favorite moments of the trip were just sitting around talking.

Craft Show Ariel purchased tickets to this major craft show for us to go to over the weekend. It was actually a lot smaller than we expected it to be and everything that was there was SUPER expensive – furniture, glass sculptures, other stuff we could never dream of affording or creating ourselves. Probably the only reason we somewhat enjoyed it was that we went straight there from Fajitas and ‘Ritas.

We didn’t see our other sisters. Plans fell through with the two other sisters we were supposed to see that weekend. I actually haven’t seen Laurel and Kadley since I graduated, so that was kind of crummy. It didn’t help that our “plans” consisted of “let’s text each other later” which is literally my least favorite way to make plans. Luckily our sorority’s big twenty year celebration is next year, so I’m sure I’ll be seeing them (and everybody else) next spring.

Sebbie’s “special treat”. Ariel has a GIANT dog named Sebastian. He is unaware that he is giant and will try to sit in your lap. He is especially a fan of looking you in the eye, meaning he puts his paws on your shoulders and gives you a good stare down. The first night we were there, Ariel, Jackie, and I went to the store to get some things to make dinner. Jackie and I both are dog owners, so we took the normal precautions – zip everything or put it where the dog can’t get it. Apparently Sebbie knows how to use a zipper and we came home to find tampons EVERYWHERE. Hope those tasted good, Seb!

I can’t imagine that they tasted very good.

All in all, it was a fantastic weekend and MUCH too short! Jackie is coming down for the Lilly Pulitzer warehouse sale in June and I think both Ariel and Jackie are going to come down once I’m in my new apartment. Here’s hoping my sisters and friends continue moving cool places so I can do some more traveling!